I’ve always believed on spending money to get things done right the first time. When I learned my car had an oil leak that required taking the engine out of the car and partially disassembling it, I decided that the dealership was the best option.

When I scheduled an appointment, the service writer agreed to provide a loaner car at no charge since the repair would take four days. When I arrived, the only loaner they had was a full-sized pick-up truck. Unfortunately, the community where I live does not allow pick-up trucks to be parked overnight, so I had to decline. He said, “No problem. We’ll take you over to Enterprise and get you a rental.

After getting dropped off outside the Enterprise location, I walked inside. My stomach tightened as I entered the waiting area with 12 people ahead of me. This was Monday of President’s Day weekend and they were waiting for cars to be returned so they could reassign them.

After standing in line for 20 minutes, I made my way to the counter where a very pleasant and bubbly woman took my information, thanked me for my patience, and said she’ll call me when my car was ready.

My uneasiness rose as I noticed that many of the 8 people still ahead of me went up to the counter to complain about the wait. The manager of the center told them that they were unloading brand new cars at the airport, which would be delivered shortly. This is when I decided to find out what was really going on, as I had a full day of appointments that I needed to get to.

I approached the manager and asked, “Could you please tell me how long my wait is going to be?”

This is where I sensed that no one was really in control of the situation. So, I asked, “Which is it…30 or 45 minutes?”

I wanted more information. “There are eight people waiting for cars. I’m at the end of the list. Are you saying that you will have a car for me in 45 minutes?”

The manager had that uncomfortable look that people get when they don’t know what to say. He looked at me, shrugged and said, “I don’t know. We’re doing the best we can. It might be longer.”

What was the manager’s job at this point? Was it to make excuses, tell customers what he thought they wanted to hear and hope for the best? Or…was it to be honest and try to solve the customer’s problems?

I said to him, “Is there someone you can call at the airport who can give you a realistic estimate of when you will have a car here for each of the people waiting?”

Sheepishly, he answered. “Well, I suppose I can call. They told me they’re sending cars…”

The person at the airport told him that three cars were on the way and should be there within 20 minutes. They were still unloading the other cars, which had to be fueled before they could be delivered. The manager was informed that it could be up to an hour and a half…or longer.

Upon learning the new reality, I felt the need to convey a message the manager needed to hear. “So, realistically, my best case scenario is an hour and a half since there are people ahead of me, and it could be longer.”

I said to him, “Sir, you have your hands full today, and you’re doing the best you can. But there is one thing you can do that will make your job easier and that is to be honest with your customers. Don’t tell them what you think they want to hear. Tell them the truth. Give them the worst case scenario so they can make alternative arrangements if they need to. If the worst case scenario is 90 minutes to get a car and you have one for them in 45, you’re a hero. But when you tell me that you’ll have a car for me in 30 minutes and I wait 90 minutes or more, you have a very unhappy customer because you over-promised and under-delivered.”

I don’t know if the Enterprise Manager got the message, but I hope that you do. Yes, it’s uncomfortable to tell a customer the truth when the truth is something less than what they expect. But over-promising is one of the worst things you can do. When you don’t deliver on the expectations you set, trust is lost. Relationships are damaged. Business disappears.

In the next segment, I’ll share the second case study with you. It’s about my experience with the car dealership, and this one will blow your mind. More importantly, it will convey an important lesson you can apply in your territory so you don’t lose trust with customers, lose business and tarnish your reputation.

Want to try STRATEGIC POSITIONING instead of "DETAILING?"

Mace Horoff is an award-winning speaker, on-site and virtual trainer, consultant and the author of the book, Mastering Medical Sales. Mace is a thirty-nine year veteran in healthcare sales. His roles included selling, managing, consulting, and for the last 16 years, leading Sales Pilot Medical Sales Performance, a consulting company dedicated to helping medical sales teams sell more and retain business without making foolish mistakes. His clients include companies in the Fortune 500 as well as smaller manufacturers and distributors. Mace writes The Medical Sales Blog and produces The Medical Sales Guru Podcast & Medical Sales Video Channel. He is also the creator of Medical Sales Academy, an online training and support site for medical sales professionals and in 2020 created The Virtual/Blended Medical Sales Course to help medical sales professionals bridge the gap between virtual and in-person selling. For information on Mace's training, workshops, and mind-shifting keynotes that generate sales growth, please visit the Sales Pilot Medical Sales Performance website or call +1.561.333.8080.
« What the Presidential Primaries Teach About Medical Sales Medical Sales Training – Necessary or Nice? » 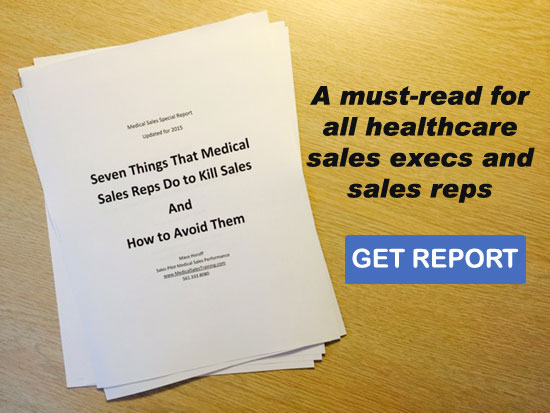 → Follow me
Cookies To make this site work properly, we sometimes place small data files called cookies on your device. Most big websites do this too.
Accept
Read more